Objective: To introduce the experience of treating fracture of both tibia and fibula with micro-invasive percutaneous plate internal fixation through fracture site approach.宁波市医疗中心李惠利医院骨科祁峰

Methods :The data of 15 patients (11 males and 4 females) ,including 14 adults ( aged 22-73 years, mean=40 years )and 1child (aged 10 years) , with fracture of both tibia and fibula were studied retrospectively in this study. A small incision was made at the fracture site of tibia. Then reposition was made under direct vision, and internal fixation was employed with steel plates insertiong through the small incision.

Results: Anatomical reduction was obtained. No complication was found. Union occurred on time in 14 patients. One case healed after a second operation.

The data of 15 patients (11 males and 4 females), including 14 adults (aged 22-73 years ,mean-40 years ) and 1 child (aged 10 years), with fracture of both tibia and fibula were studied retrospectively in this study. According to the types of fracture of shaft of tibia and fibula  and AO types of fracture of tibia 6   ,Type A1 or A2 eas found in 9cases and Type B1 or B2 in 6 cases. Closed fractures were found in 12 cases and small wounds in 3 cases, which were caused by the fracture sites stabbing through the skin. The classification of Gustilo belonged to Type 1 .The fracture of shaft of fibula did not involve ankle joints or distal tibial or fibular ligaments.

The fractures of 12 patients were fixated by tibial locking compreession plate (LCP,AO Company , Mathys Medical Ltd ,Switzerland and 3 by common compression plate Jiangxu Wujing medical instrument  factory , made in China. Tibial internal fixation wit double plates were made in 10 patients and tibial internal fixation with single plate and fibular plate fixation in 5 cases . All operations were performed at 1-7 days after injury.

A longitudinal small incision (about 3cm in length) was made on the plane of fractured tibial site in the front of the leg, which was exactly enough for plate insertion.  If there existed small wounds at the fracture site, the small wounds would become the entrance for plate insertion after thorough debridement. After the skin was cut open, a periosteal elevator was used to make sneak separation towards the proximal and distal ends, respectively, keeping the depth above the periosteum. The isolated tunnel should be long enough for complete insertion of plates. Through the opened small incision, reposition was made under   direct vision and the fracture was fixated with punctiform bone-holding forceps. After complete insertion of the plate through the small incision ,the plate was then removed to fix the fractures. On the surface of skin, a plate of the same kind was taken as the template to determine the position of screws. On the skin for screw entrance, a small incision was made, then percutaneous  compression screws or locked screws were inserted. Generally speaking, 7-9hole plates were used to ensure the length. And 4-6 screws were used for fixating each plate. Two plates could insert through the same small incision,  one on the medial part and the other on the lateral part of the tibia. Before insertion, the plate should be prebent according to the physiological curvature of the tibia. The fracture of fibula could be fixated or not. If the tibia was fixation with plate were often used for fracture of tibia. If the tension of the soft tissues in the leg was higher and there existed the risk of osteofascial compartment syndrome ,a relief incision could be made on the lateral part of the leg. Generally speaking, 7-10 days later, the relief incision could be sutured directly after repercussion. During the operative reduction, it needed no X-ray examination. After internal fixation, if X-ray examination showed that the position was satisfactory, we could finish the operation on time.

In this study , no patients suffered from nerve injury or blood vessel injury. No infection occurred in the incision or the fracture site. All the incisions reached Grade A healing, Postoperative X-ray examination that 14 patients obtained complete anatomical reduction and 1 patient had slight lateral angulation for about 3°,which may be caused by the non-enough prebent plate and slight angulation  displacement after fixation by compression screws. Because of the small visible scope of X-ray machine, postoperative X-ray examination did not find the slight  angulation. After operation, the affected extremities received functional training with on weight loading. All the patients were followed up for at least half a  year till the union or nonunion of fracture. Fourteen patients healed on time and could walk on the ground . only one patient with fracture of both tibia and fibula ( Type 42B2.2) did not heal after one year of tibial  internal fixation with single plate, but he healed after tibial internal fixation with double plates and bone grafting with iliac bone were performed .After operation, the activities of the ankle joints of all the pateints were normal and the function of ankle joint were excellent.

Fig. 1.  After operation, incisions for percutaneous plate and screws insertion. 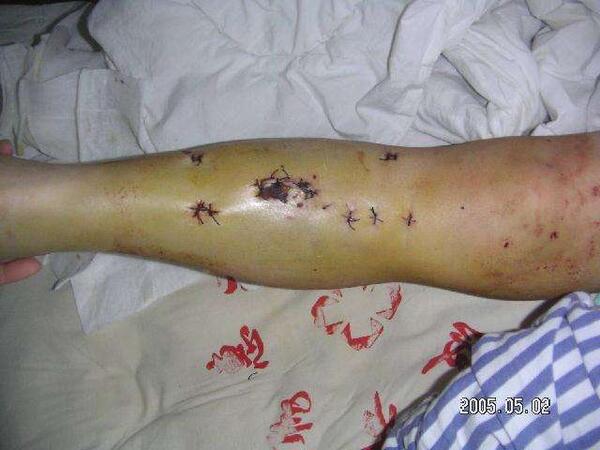 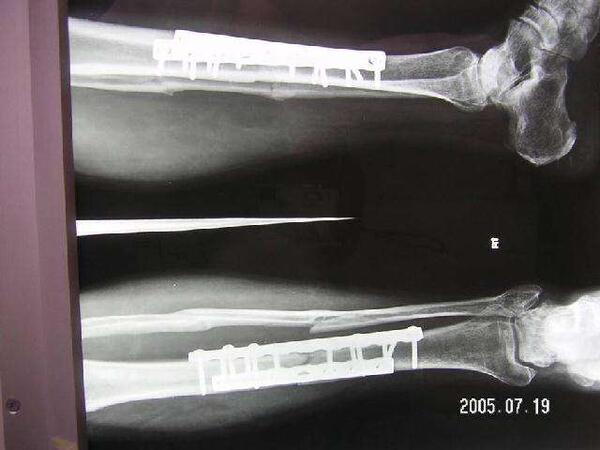 Minimally invasive bone plate fixation is a new type of operation under the idea of minimally invasive surgery, 1  which is usually called biological fixation. Its main operating characteristics are to adopt such methods as making small incisions to minimize the incision range and the stripping range of soft tissues in order to decrease the injury of soft tissues . during the operation, indirect reduction should be performed but it is unnecessary to emphasize precise anatomical reduction and it is unadmitted to perform anatomical reduction at the price of sacrificing blood transportation. Locked bone plate is chosen with technique of bridge type bone plate to avoid the bone plate compressing the bones and to reduce the interference of blood transportation in the fracture site. The core problem is to protect the regional blood transportation in the fracture  site.2-4 There are few soft tissues in the anterior tibia, which is suitable to perform minimally invasive percutaneous plate osteosynthesis comparatively.

Before the widely use of imported internal fixation materials ,we usually make routine operative incisions to perform operations and use ordinary steel plates to fixate fracture of tibia. In recent years, inspired by the idea of minimally invasive operation, we crispate the original routine incision for about 3 cm and change the original placing plates on the tibia to insert plates, which can decrease the incision range, decrease the stripping range of soft tissues, and maximally protect the blood transportation. With our method , we can insert two plates into one small incision to fixate the medial and lateral parts of the tibia.

In our opinions ,there are several advantages to make small incisions in the fracture site. (1) Small incisions can expose the fracture site, which makes it easy to perform operative reduction under direct vision so as to obtain a better result of reduction and reach anatomical reduction essily.(2) Small incisions can ensure the exact position for inserting plates and make it easy to identify the soft tissue tunnels, which ca reduce blind insertion and avoids soft tissue injury in some degrees. (3) The fracture site can be viewed and held by punctiform bone-holding forceps through the small incisions, which makes few effects on blood transportation. (4) When there exist impacted soft tissues, which make it difficult to perform closed reduction, direct operation treatment can be employed.(5) Due to the operations performed under direct vision, it needs no X-ray machine during operation, which reduces the possible influence of repeated in the fracture site. And (6) two plates can be inserted pass through one incision ,which can make the internal fixation more forceful.

Nowadays ,based on the recent  BO theory of AO School of thoughts, many surgeons strengthen that it is successful to make fracture site reach functional reduction, 1 but no one will refuse favorable reduction. In our opinions ,though it is unnecessary for fracture site to reach anatomical reduction , under the conditions of not affecting the blood transportation in soft tissues and bone tissues, we should strive for preferable reduction as far as possible .Satisfactory reduction not only is beneficial for functional recovery of the fracture site, but also avoids the complaints of the patients and reduces the contradiction induced by position problems . will small incisions in the fracture site influence the skin vascularization in the fracture site and increase the chances of disruption and infection of the wounds?  We also worry about these problems, but no disruption or infection of wounds occurred in the patients in this study.

Another characteristic of minimally invasive operation is that in some patients  ,through the same small incision in the fracture site, one plate can be inserted into the medial surface and the other plate into the lateral surface of the tibia for internal  fixation. The result of this study has proved that through the small incision, internal fixation with double plates can be performed and satisfactory results of reduction and fixation can be obtained . During operations. The medial plate is usually fixated first, and the position for the lateral plate is designed, with no conflicts when setting the medial and lateral screws. There are fewer soft tissues on the medial part of the tibia, so we can find the plate holes easily relying on feeling by hands. But there are more soft tissues on the lateral part of the tibia ,we should place a plate on the surface of the skin to serve as a reference for finding the screw holes. If internal fixation with single plate is performed, it should be fixated on the medial part of the tibia. It is better to choose LCP and to place the plate on the periosteum and to make bridge fixation. We can also choose ordinary compression plate, but we should pay more attention to the prebending angle of the plate. Otherwise ,angulation displacement is easy to happen after twisting compression screws.

Why have we chosen fixation with double plates? We think that as an eccentricity fixation, the mechanical stability of a single plate cannot compare with that of double plates in any case. After using double plates ,the patient can do functional exercises more daringly, which can avoid muscular atrophy and joint stiffness. Although there exist problems such as excessive interference of blood transportation and stress protection in the fracture site with double –plate fixation, internal fixation with single plate is much more invalid.5 Generally speaking, we incline to choose double-plate fixation when treating tibial nonunion. Some researchers. 3 thought that too forceful internal fixation would make problems such as stress protection, so they advocated to reduce the strength of internal fixation and to perform elastic fixation. They also thought that micromotion of the fracture segment would accelerate the union of fracture. However, it is hard to control the standard of elastic  fixation in clinic. Therefore, when it is hard to choose either controlling the strength of internal fixation or avoiding  excessive stress protection, we prefer to choose the former.

However, we met many problems during minimally invasive operations. (1) when we make some small incisions in the fracture site , we always worry about such problems as cutaneous necrosis ,plate exposing and infection. (2) It is difficult for the small incisions to reveal the tibial curvature directly, which makes the pre bending degree of the plate hard to control. If the prebending curvature does not conform to the tibial curvature, angulation shifting occurs easily after twisting screws. If we use  LCP, the plate need not stick to the bone surface tightly, which can lower the requirement of prebending. But sometimes we need to use compression scrwws with LCP,  reshifting will occur after compression. (3) Compared with operations with routine incisions , the operative time of minimally invasive operation is lengthened obviously. And (4)limitations also exist in minimally invasive operations, for example, we only succeed in treating fracture of tibia in Type A, Type B1 and type B2  of  AO  somatotype.